The Amy Howson was built at Beverley in 1914 by Joseph Scarr & Sons for George Robert Scaife of Beverley, rigged as a keel and named SOPHIA after his wife. She was used for general cargoes including grain to Sheffield and other canal wharves, carrying coal back to Hull and Beverley. She was built to what is known as Sheffield size, 61ft-6ins (18.75m) long, 15ft-6ins (4.72m) beam to allow her to get as far as Sheffield canal basin and  with extra depth in the hold to allow her to carry the maximum cargo while still having briggage under Bacon Lane bridge (the lowest bridge above the Tinsley flight of locks).

On 27th and 28th of September 2014 Amy is returning home to her home town of Beverley in the East Riding of Yorkshire to celebrating her centenary. The festival will open from 10am until 4pm on both days and other Humber Keels are attending this moment in history.

Pop and see this icon and enjoy the weekend.

The History of Amy Howson... 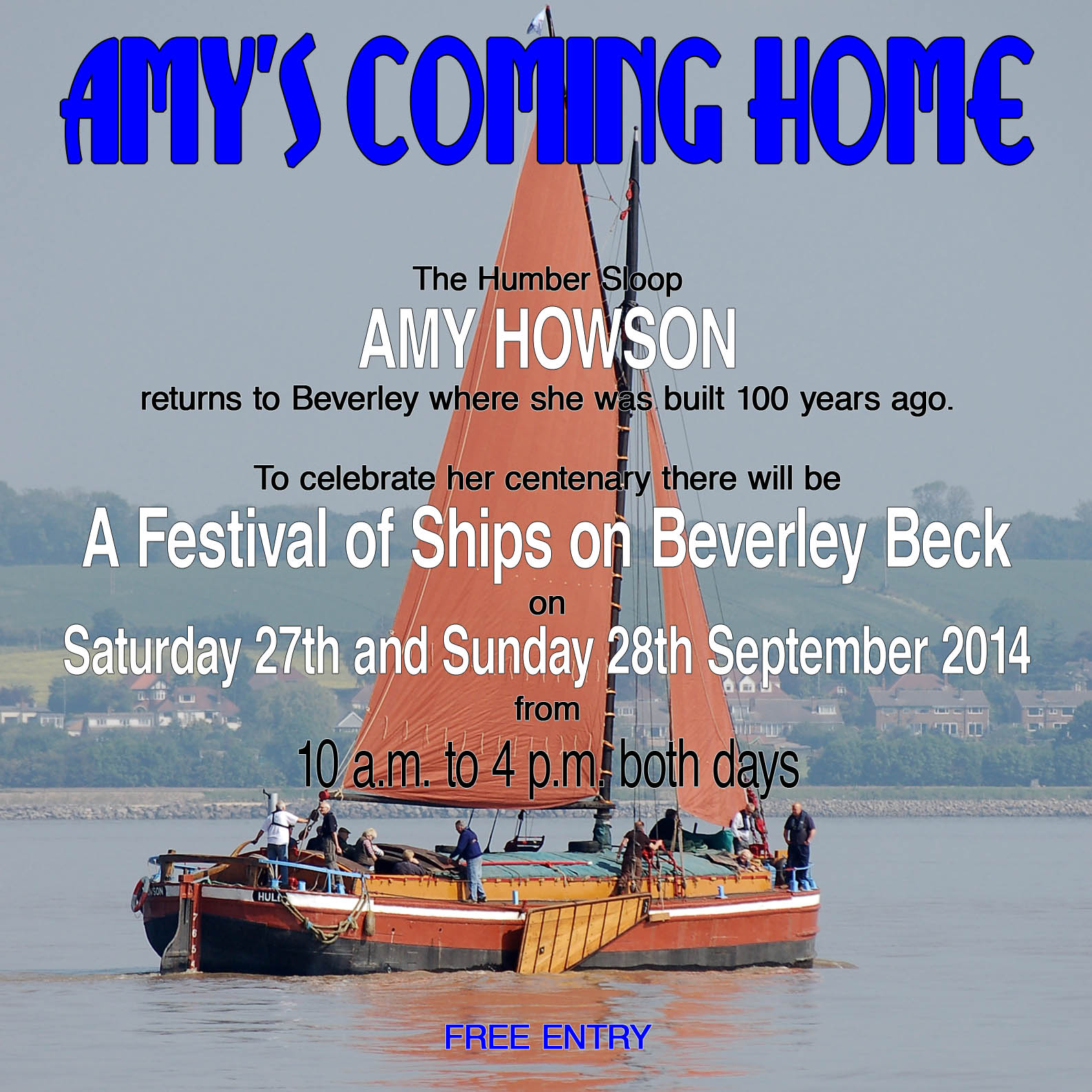 What is the Humber Keel and its origins?

Built at Beverley in 1914 by Joseph Scarr & Sons for George Robert Scaife of Beverley, rigged as a keel and named SOPHIA after his wife. She was used for general cargoes including grain to Sheffield and other canal wharves, carrying coal back to Hull and Beverley. She was built to what is known as Sheffield size, 61ft-6ins (18.75m) long, 15ft-6ins (4.72m) beam to allow her to get as far as Sheffield canal basin and  with extra depth in the hold to allow her to carry the maximum cargo while still having briggage under Bacon Lane bridge (the lowest bridge above the Tinsley flight of locks).

In 1915 she was sold to Ernest Wright who had the keel rig taken out. SOPHIA was re-rigged as a sloop at Clapsons shipyard at Barton, using a reduced rig from the sloop SUCCESS. She was used for shoring work in the lower Humber (carrying stone for river bank repairs) in company with GLEANER (later renamed MADGE JARVILL).

Sold to Goldthorpe, Scott and Wright of Grimsby in 1920, she was put on the Part 1 Register of British Ships to enable her to be mortgaged as security for a bank loan. Given the Official Number 14080 and with her name changed to I KNOW, she carried market goods and parcels between Pickwells Wharf, Grimsby, and Hull. The business did not pay well and Barclays Bank, the mortgage lenders, repossessed I KNOW.

William Henry Barraclough, a sloop and lighter owner of Morpeth Street, bought her in 1922. He re-registered her at Hull and changed the name to AMY HOWSON. Madge Jarvill and Amy Howson were the new owner’s married daughters.

AMY HOWSON was registered in 1923 with the Port Health Authority as required by the Port Health Act, and the register shows that she was permitted to accommodate a maximum of two adults and three children in the aft cabin, and two adults in the fore cabin. Her cargoes now included phosphate for the chemical works at Barton and Howden Dyke, and she was also a regular visitor to the Yarborough Oil Mills at Brigg, delivering cargoes of maize or oil seed.

The aft cabin on AMY HOWSON was reputed to be the finest on the river, the grain in the varnished woodwork having been carefully matched with brass work all around. Joe Barraclough, son of the owner, was skipper until he left to captain the larger Sloop MINNIE in 1933,  at the same time Len Barraclough left MADGE JARVILL to captain AMY HOWSON.

Developed from keels in the eighteenth century, the Humber sloop was designed to sail efficiently in the river’s shoal-ridden open estuarial waters, and to make coastal passages. With heavily built clinker hulls constructed first in timber, later in iron and steel, sloops carried a gaff rigged main sail and triangular fore sail. This fore-and-aft rig worked well in the Humber tideway, where much work was beating to windward and close hauled sailing, and it was efficient enough to make regular trade passages to the Wash ports, to Bridlington and to the Thames where purpose built sea going sloops carried a topsail and was rigged with a bowsprit to carry a jib for the open water passages.

Tiller steered, the sloop lines followed the traditional pattern of the keel with a similar deck layout and bluff bows but without the sharp turning run aft to keep cargo to a maximum. Sloops were given a much finer run aft to make them more efficient sailing vessels, sometimes the hold was built deeper to compensate depending on the owner’s requirements. The mast, stepped in a lutchet and lowered by a roller set against the head ledge, was set forward to suit the hull. The thirteen foot pitch pine and oak lee boards were hung well forward of amidships to balance the ship under sail, and worked by vertical rollers on the after rails.

Sloops’ sails were raised and lowered by halyard or 'crab' rollers on the port and starboard coamings, twin hold sloops had them in the 'sparrings'; the deck area between the two holds. The sails were tanned with preservatives, which coloured them ochre. The jib and topsail of the sea going sloops were usually left white, being stowed in the cabin when not being used they would have smelt awful had they been through the preserving process. (The topsail and bowsprit would have been too cumbersome to be practical in the confines of the Humber shoals and for the passage through locks).

The high coamings over the hold were covered by wooden hatches, weatherproofed by tarpaulins. Accommodation was in a skipper’s cabin under the afterdeck and a crew cabin under the fore deck.

Primarily working in open waters, the dimensions of the Humber sloops were not constrained by inland waterways and so tended to be large. A typical 1900's sloop measured 68ft long by 17ft-6ins wide and carried 150 tons or more. The most common sloops after the canal system had been redesigned in 19th century were the Sheffield size ships as ours are, at 61ft-6ins long by 15ft-6ins wide to negotiate the inland locks and carried about 100 tons.

Sloops mainly handled bulk cargoes between the Humber ports, carrying farm produce from Lincolnshire, coal from the West Riding, bricks and tiles between both sides, cement and chalk stone from Barton and South Ferriby to Hull and transhipping phosphates back to the fertiliser works. In a summer the sea going trade would be to Louth, Saltfleet, the ports of the Wash and on south to the Thames, to the north trade would be to Bridlington, the Tyne and all ports between.

With the advent of motorised vessels, trade under sail declined steadily through the middle of the twentieth century. Most sloops (and keels) were converted to motor barges prior to 1939 using a grant from the MOD, others were used as lighters or dumb barges. The last sailing sloop was SPRITE, unrigged in 1950.

In 1981, the restored HKSPS sloop Amy Howson became the first sloop to sail the Humber in over thirty years.

How she looks today

There are no comments for this entry.